Don’t have time or desire to attend court for your speeding ticket or traffic citation? You don’t have to settle with a guilty plea by paying the ticket, fine, and court costs ahead of time. In the state of North Carolina, an offender can fight any type of traffic violation with the aid of an experienced traffic ticket lawyer. Our team of traffic ticket attorneys at Coolidge Law Firm will fight to protect your right to drive in North Carolina with less impact to your long term

Paying a traffic ticket is both extremely costly and can have long term effects on your driving in the future. Even a simple speeding ticket can effect your insurance points and potentially affect your driver’s license privileges without professional legal help. It doesn’t matter if your traffic ticket is for speeding, driving with a suspended license, running a stop sign, careless and reckless driving, or other traffic offenses they are all a direct violation of the traffic laws and will be taken seriously by court officials.

Our law firm recognizes that receiving a speeding ticket or traffic tickets of any type can be a confusing and scary experience, so we ensure our traffic ticket lawyers will discuss the situation in honestly and in a way you can understand. So if you are ready to have your traffic ticket taken care of without the stress of attending court or risking an increase in your insurance rate call us today or fill out our free consultation form!

A driver license only gives you the legal right to drive following the federal state issued traffic law. If you chose to violate certain traffic laws, then you must be aware that there is extended list of traffic offenses that can be issued to a driver with any level of experience. North Carolina Law is known to have harsh punishments which is why you should always have a skilled and experienced law office who knows your legal options on your side. Below is a list of traffic offenses our team has success in handling every day:

✓ Speeding in a School or Work Zone

Speeding offenses in North Carolina carry a variety of penalties, including steep fines. The fines for speeding tickets vary depending on the offense. In some instances, the location in which the offense occurred could increase the fees, such as speeding in a school zone or a construction area with workers.

Most speeding citations do not require a court appearance. These “waivable” offenses include:

However, drivers still have the option of having their case heard before a district court judge. Choosing to simply pay the ticket results in a guilty judgement and all the same consequences as if being found guilty after a trial.

Drivers can lose their privilege to get behind the wheel in North Carolina in some situations, including out-of-state drivers. An appearance in court could result in a reduction of your citation, which may save you a substantial amount in insurance premiums. It also could help to keep your driving record clean.

Some traffic citations, however, cannot be waived and require a court appearance. A citation for driving more than 15 mph over the posted speed limit while driving more than 55 mph likely would require an appearance in court. If you fail to appear on your court date as required, your driver’s license may be revoked and you may be arrested.

Do You Have To Go To Court For a Speeding Ticket in North Carolina? 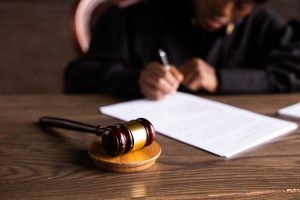 North Carolina is known for having the toughest traffic law of any surrounding state. But one of the best aspects of receiving a North Carolina speeding ticket is that you have the option to have a attorney represent you in court, which means you can have the benefits of attending court such as lower insurance rates, avoided jail time, and there will no longer be a traffic violation on your license. All you have to do is find a law office you can trust, pay court costs, and any lawyers fees.

After being convicted of certain motor vehicle violations in North Carolina, including speeding offenses, driver license points are placed against the person’s driving record. Points vary based on the type of offense. For a single offense, they can range from one point to five points.

North Carolina driving law stipulates that points are given for the following speeding offenses:

If you accumulate seven points, you may be assigned to a driver improvement clinic. The clinic fee is $50. Upon satisfactory completion of the clinic, three points would be deducted from your driving record. Drivers are eligible to attend driving improvement clinics once every five years to reduce driver license points.

Those with more than twelve points in the past three years may lose their driver’s permit. If you get eight points after reinstatement, then driving privileges are restored. When you have limited driving privileges, a license suspension can even occur.

Drivers can lose their privilege to operate a motor vehicle in North Carolina after certain traffic violations, including speeding citations. Although the citations seem minor, they can have long lasting effects.

If a driver accumulates as many as 12 points within a three-year period, his license may be suspended. The accumulation of eight points within three years following the reinstatement of his license can result in a second suspension.

Driving privileges can be suspended for other reasons as well. If you were convicted of speeding more than 15 miles per hour above the posted limit, you could lose your license for a minimum of 30 days.

The North Carolina Department of Motor Vehicles also can suspend a person’s driver’s license for two or more convictions in a year of speeding while going more than 55 miles per hour. Even if a driver was traveling only one mile over the speed limit, there could be repercussions.

Recently, the Wake County District Attorney’s Office began allowing, under certain conditions, a speeding citation to be reduced to a nonmoving violation called “Improper Equipment.”  The Improper Equipment charge means the accused failed to maintain a speedometer working in good order in violation of N.C.G.S. § 20-132.2.

An Improper Equipment conviction comes with a surcharge and a possible fine. However, this reduction prevents the assessment of DMV points and insurance points.

The prosecutor has the discretion over whether to agree to the reduction. Your best opportunity at obtaining the reduction to improper equipment is to hire a   skilled attorney to assess your case and negotiate with the  prosecutor.

Is Traffic Offense Citation the Same As A Traffic Ticket?

The terms have always come to be interchangeable, which generally means a similar thing. In the majority of jurisdictions, citations have no different categories than tickets so the any type of citation from a traffic violation is basically a ticket. The only thing that makes the documents provided different is a citation is what the officers hand you after traffic violation.

Why You Need A Speeding Ticket Lawyer in Wake County?

A speeding ticket is a common occurrence for many drivers. However, too many people who get tickets behind the wheel assume they should just pay the fee. Traffic violations can be disputed, but it could be a lengthy procedure. People often pay the ticket to avoid the hassle.

Speeding tickets can tarnish a clean driving record. North Carolina has adopted a driving point system.  Drivers receive points for each conviction of a moving violation. Accumulation of these points can have severe repercussions including the loss of the privilege to drive on the streets of North Carolina. An experienced criminal defense attorney can help drivers protect their rights and keep their license free of points.

If you have received a speeding ticket contact a skilled Raleigh speeding defense attorney at Coolidge Law Firm. The attorneys at Coolidge Law Firm will fight to protect your right to drive in North Carolina. The team will examine all of the evidence regarding your traffic stop and work to get your charges reduced or even dropped.

Traffic violations should be taken seriously in North Carolina, including speeding citations. If you have been charged with speeding contact a skilled Raleigh speeding defense attorney at Coolidge Law Firm. The attorneys will work to get the best possible outcome in your case. Call (919) 239-8448 or fill out the form below for a free consultation.